In 1964, Robert and Carol Hanlin, both of whom performed with American Ballet Theatre, left their home in San Mateo, California to open the original Goleta School of Ballet (not to be confused with the current Goleta School of Ballet). After professional performing careers with ABT, San Francisco Ballet, Eugene Loring’s Dance Players in Hollywood, Broadway musicals, film, and television; and having studied with some of the world’s finest teachers including George Balanchine, Muriel Stewart, Anthony Tudor, Margaret Craske, The Christensen Brothers, and more; the Hanlins were very well qualified to open their own school.

They soon recognized the need for additional performing opportunities for their advanced dancers and founded the Goleta Civic Ballet in 1968. By 1970 the Company was collaborating with the Santa Barbara Symphony when then conductor, Ronald Ondrejka invited the company to join the Symphony in excerpts from The Nutcracker for their Tiny Tots Concerts. Soon Peter and the Wolf followed, and then the opportunity to be part of the Symphony’s in-school demonstrations for five years. In 1976 GCB joined the Symphony’s Concerts for Young People, at the Arlington Theatre, reaching some 8,000 children annually! Of course, the largest joint undertaking has been The Nutcracker started in 1975. The Goleta Civic Ballet, now the Santa Barbara Festival Ballet, was incorporated as a not-for-profit company in 1974, and in 1975 joined the Pacific Regional Ballet Association (now known as Regional Dance America.)

The Hanlins retired in June of 1991, turning the school over to Denise Rinaldi, herself an alumna of the Goleta Civic Ballet, and Michele Hulse. In 2006 Ms. Hulse retired and Mrs. Rinaldi took over as sole owner. In 2010, the Santa Barbara Ballet Center merged with the not-for-profit, Santa Barbara Festival Ballet, and was now able to accept donations for student scholarships as a California, not-for profit, 501(c) 3 corporation.

The SBFB Conservatory uses the Cecchetti syllabus as its base of training and enters students annually in exams for their grade level. Conservatory Director, Denise Rinaldi, is a Fellow of Cecchetti USA, an examiner for the organization, as well as its Executive Director. The standard of teaching at the Santa Barbara Festival Ballet is a high priority: instructors have over 100 years of combined teaching experience. Classes are carefully graded to provide age appropriate training. All staff members are professionals in their field, or are carefully trained in our teacher training program. The Company dancers are privileged to work with Valerie Huston, UCSB Senior Lecturer in the Dept. of Dance, as the company’s resident choreographer.

Most gratifying is the number of children of former dancers we have studying with us. When the Hanlins were requesting funding for the first production of The Nutcracker they stated, “We hope to establish something children of Santa Barbara can grow up with, on both sides of the footlights.” That indeed has come to pass. 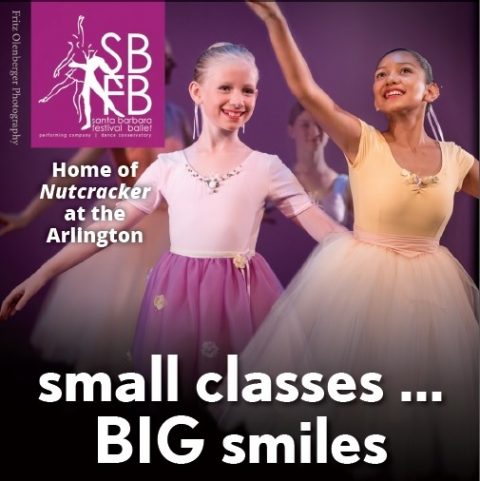 Home of "Nutcracker at the Arlington"